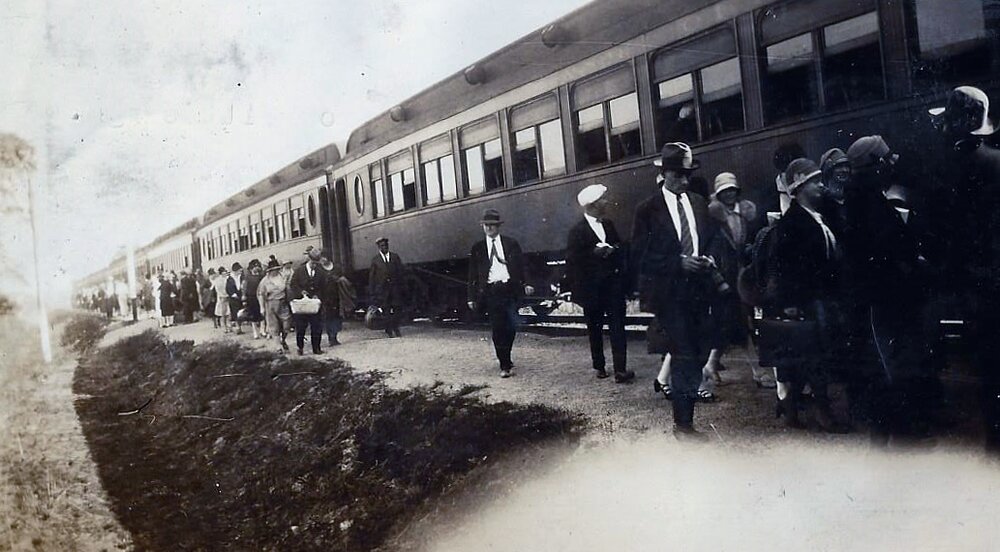 In October 1884, when the Southern Railway line was being built through Shenandoah County, Virginia, local farmer Abraham Neff agreed to let the railway quarry limestone from his property, located alongside the railroad.
1884
Cave Discovered 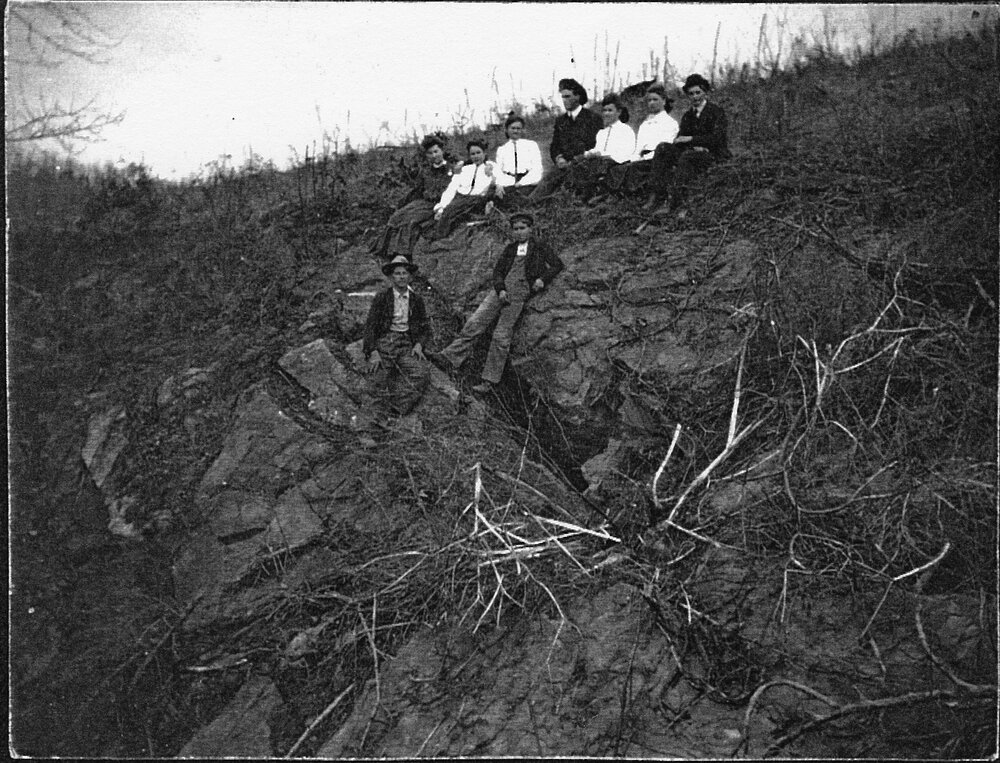 One Sunday while the workers were away, Neff’s sons were playing in the quarry when they felt cool air rising from a hole in the ground. They retrieved ropes and candles and scrambled down a 275-foot twisting and winding shaft. At the bottom, they discovered a huge, dark room filled with stalactites, stalagmites and flowstone.

They were too afraid to venture farther, so they went back up the shaft and told the family about their discovery. The family explored the cave further and discovered the large caverns system beyond the original room. 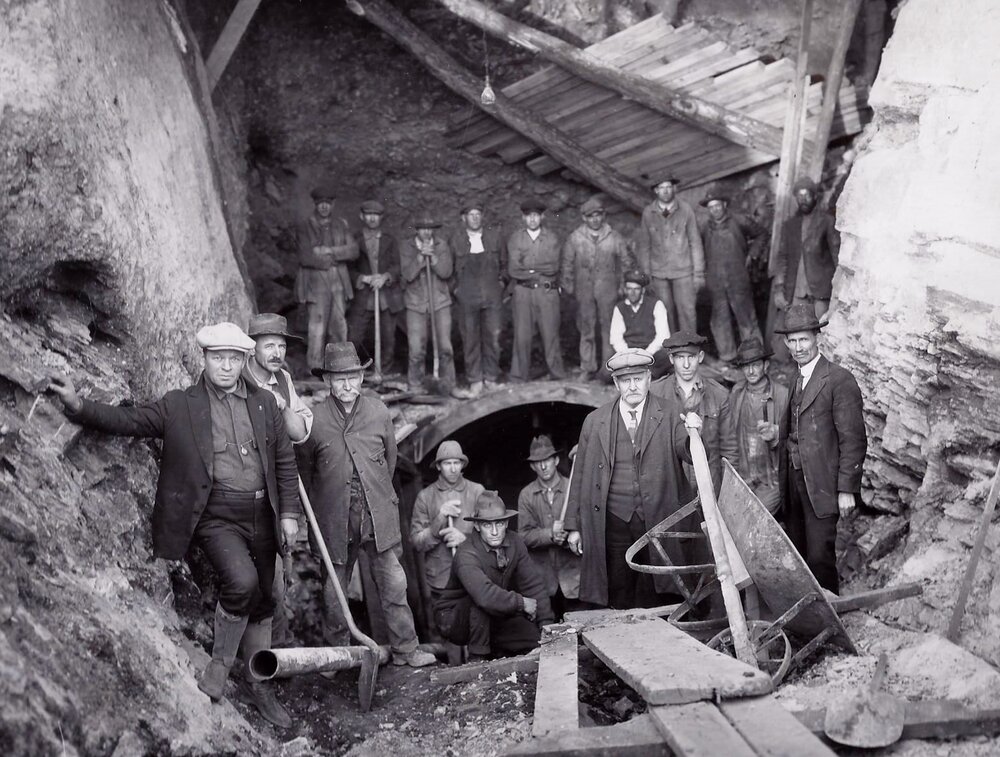 Word spread about Shenandoah Caverns, and by the time the railroad was nearing completion in 1890, knowledge of the caverns had reached local Woodstock businessman Hunter Chapman, a stockholder in the B&O Railroad. He approached the Neff family about selling their property, and with it, the caverns.

An agreement was reached, and in 1920, construction began on the caverns entry and passageways. Tons of gravel were brought in and used to build the floor up from between 3 and 15 feet to create the pathway. 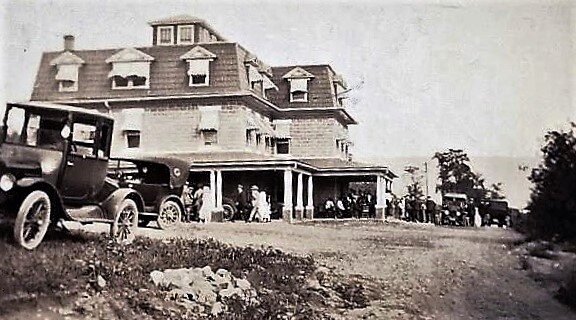 Chapman also built a 3-story lodge building. The main floor contained the gift shop and caverns entrance, while the two top floors housed a full-service hotel. Shenandoah Caverns opened for tours in May 1922.

Now that the railroad was complete, train excursions began running from Washington, DC to Shenandoah Caverns. 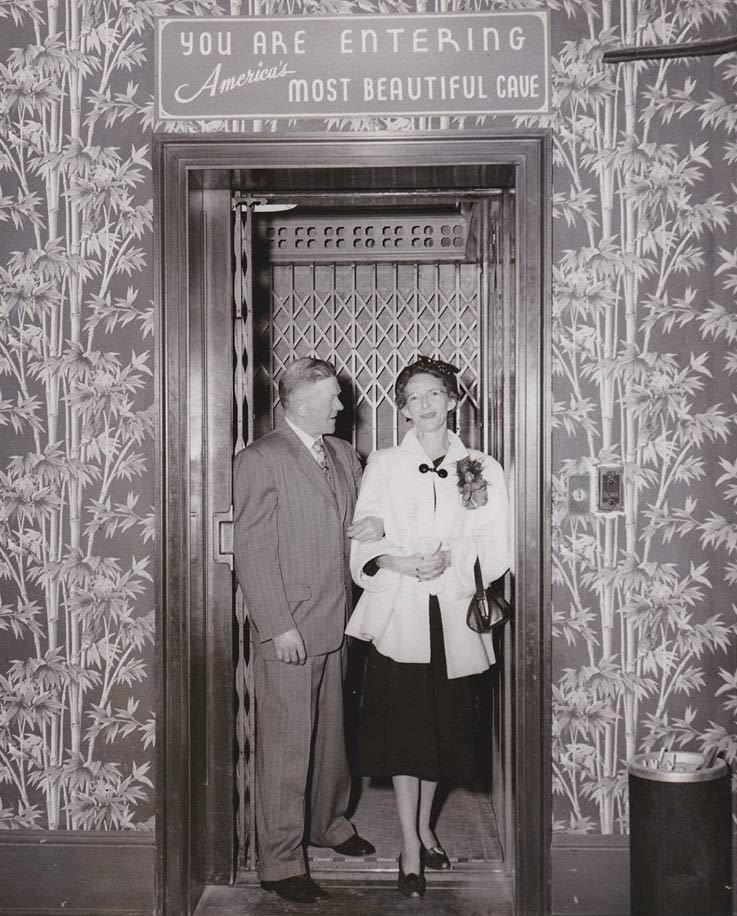 In 1930, Chapman installed an elevator to enter the caverns. To date, it is still the only Virginia caverns with an elevator. The 60’-deep shaft was hand dug, and the elevator began operation in 1931.

The caverns flourished, with guided tours, events, and more—even after train excursions ceased operations after WWII. 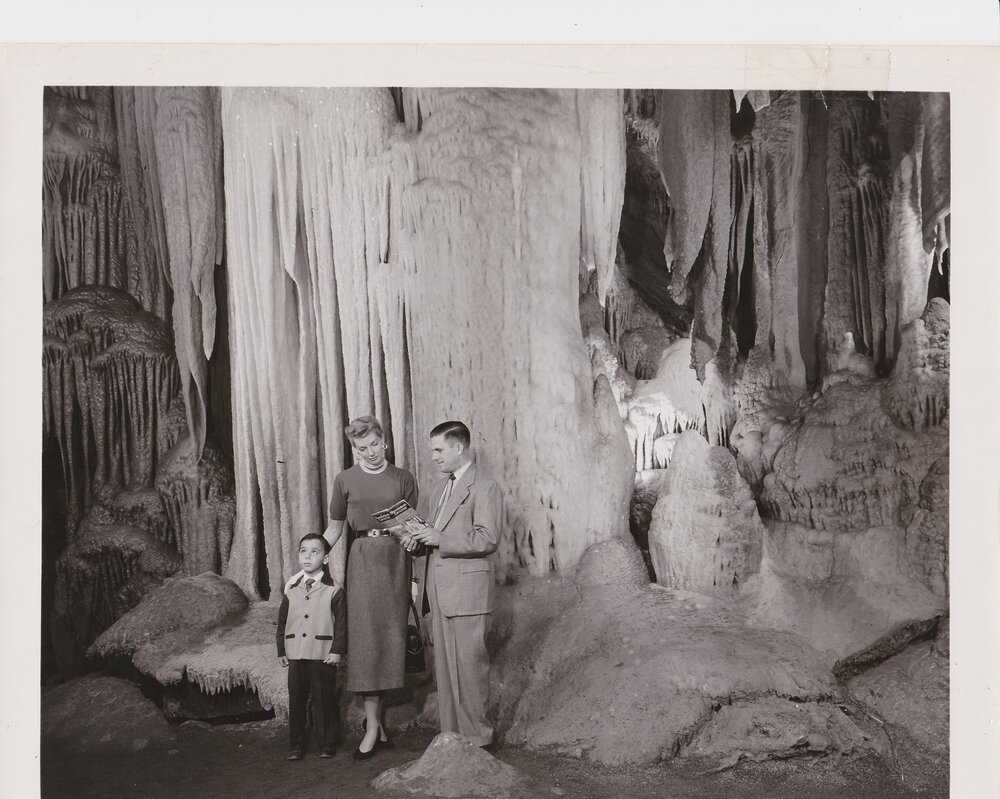 Around 1954, Chapman sold Shenandoah Caverns to H.B. Long, a Shenandoah Valley entrepreneur. A few years later, Long wanted to build a parade float for the annual Apple Blossom Parade, held in Winchester, VA. He contacted Earl C. Hargrove, Jr. who owned the decorating company Hargrove, Inc. based in Lanham, MD, that designed parade floats for every Presidential inaugural beginning with Truman’s in 1949, inaugural balls, the National Christmas tree, and other national celebrations. 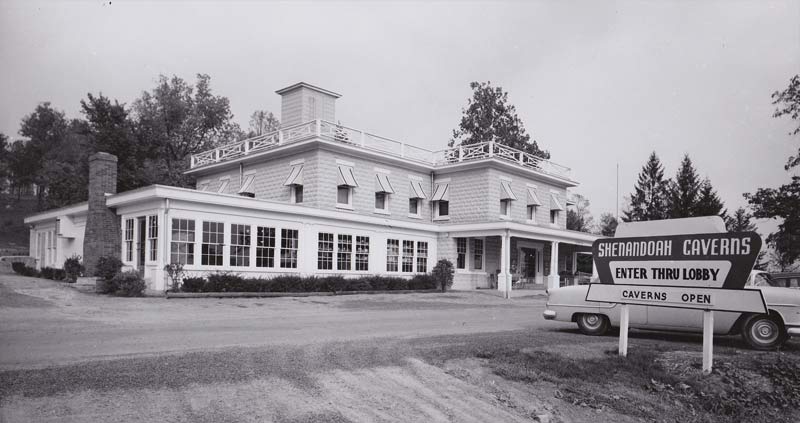 The Shenandoah Caverns Hotel was decimated by a fire in February 1957. The entire top story of the building was burned completely off by the fire. Fire companies from all around the county fought the blaze. Renovations of the building began immediately and actually the Caverns only closed to the public for one day until power was restored and the Caverns tours resumed. After the fire, the full renovation of the building was completed in the summer of 1957. The Caverns main entrance building, or hotel as we like to still refer to it at times, still remains the same as it did since the renovation in 1957.
1966
New Ownership - Hargrove 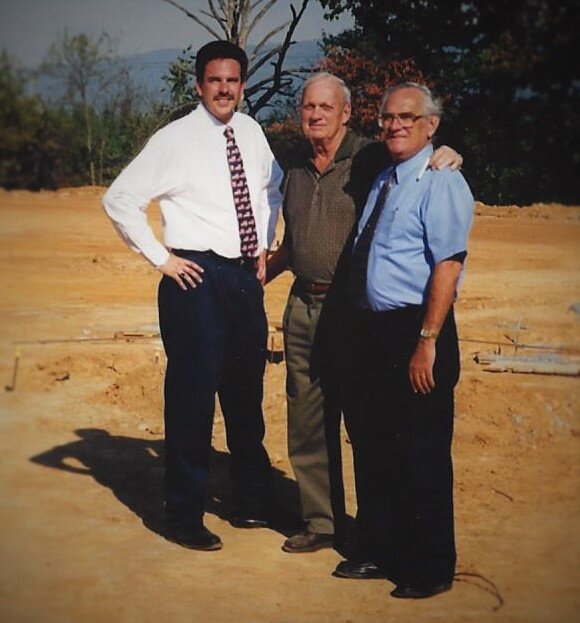 With the help of Dan Proctor, whose family had been managing the caverns since the 1950s, Shenandoah
Caverns continued to grow and develop through the ‘70s, ‘80s and ‘90s.

The caverns Pixie was introduced as the mascot, and over the years, Hargrove added more fun things to see and do while guests were visiting, including animals like peacocks and goats. 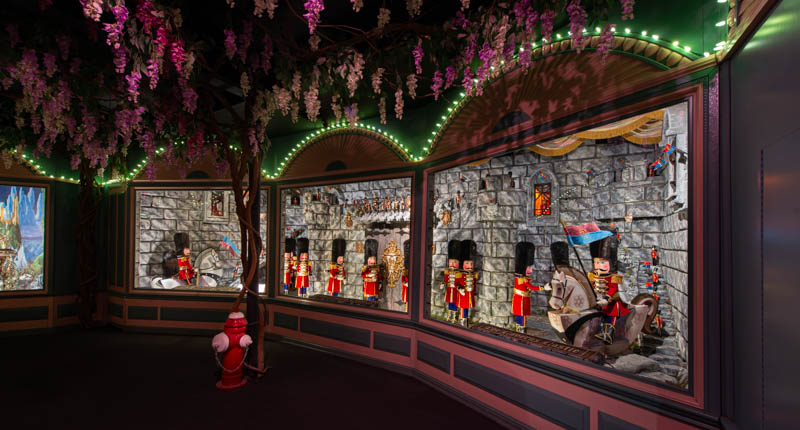 In 1996, Hargrove renovated the second floor of the Caverns Lodge and built Main Street of Yesteryear to showcase various Parade float props, as well as antique window displays he had collected. 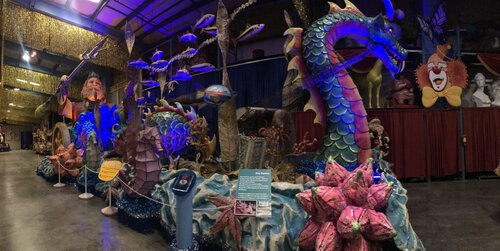 In 2000, he added a museum (American Celebration on Parade) to showcase parade floats that Hargrove company created over the years, and in 2007, opened the Yellow Barn as an events facility and agricultural display.
2015
Hargove Generation

Mr. Hargrove passed away in 2015, but his legacy and creative spirit live on at Shenandoah Caverns through the new owner, his daughter Kathy Hargrove Kelly, and the manager and staff who call this place home. 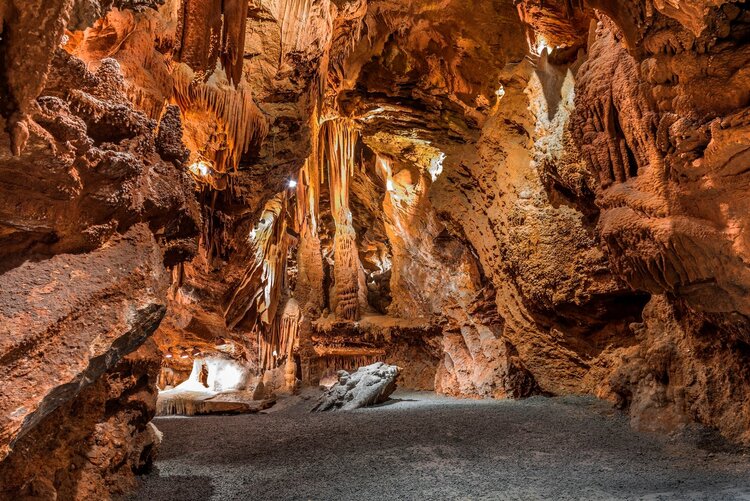 The caverns look much the same as they did when they were first opened in 1922, and though technology may have changed and improved since, the original feel and atmosphere of our attraction remains. We are pleased to provide you with a family-friendly, personalized experience far from the commercial rush-hour life of the city. We hope your visit is unforgettable and that you’ll want to bring future generations back to enjoy the beauty and wonder that is Shenandoah Caverns.